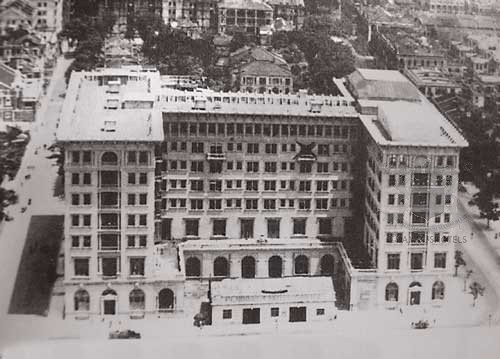 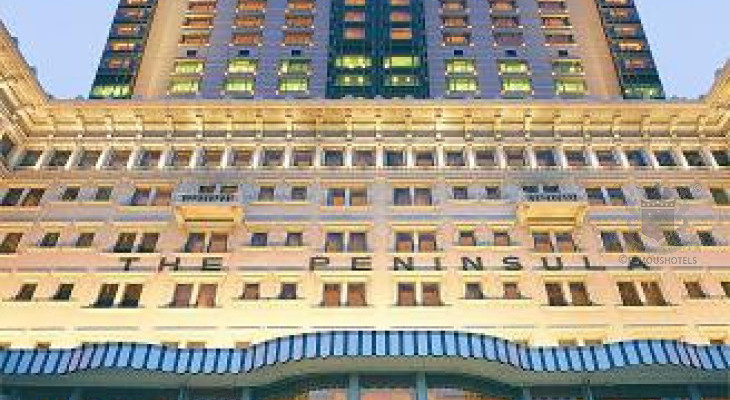 'I feel like a million dollars!' became the immortal first impression of a lady walking through the corridors of The Peninsula at the inauguration on 11 December 1928. After several delays, The Peninsula was officially opened for the public by His Excellency the Officer Administering the Government, the Hon. Mr. W.T. Southorn, C.M.G. Doubtless very much due to the effort of the groups managing director J.H. Taggart.

How the Stage was Set

1953, the finest restaurant at the hotel should be named after him.

1970: A fleet of eight Brewster Green Rolls Royce Silver Shadow is acquired for The Peninsula. It was the largest single order Rolls Royce had ever received.

1926: A year of unexpected trouble. China is torn by civil war, leading to enormous setbacks in the turnover of the companies hotels in Peking and Shanghai. A strike in Hong Kong affects the construction of the Peninsula. Despite all these difficulties work progresses satisfactorily and is close to completion.

1927, February: The troubles in China escalate and The Peninsula accommodates her first guests. Not the international High Society, but the British 2nd Battalion Coldstream Guards and a battalion of the Devonshire Regiment. These troops were sent from Britain to form part of the Shanghai Defence Force and to protect the colony.

1928: Kai Tak Airport is under construction April: The situation in China calms down and the troops leave The Peninsula. Now work resumes on the interior fittings, decoration and furnishing.

1928; 11 December: Finally The Peninsula is officially opened for the public by His Excellency the Officer Administering the Government, the Hon. Mr. W.T. Southorn, C.M.G. Doubtless very much due to the effort of the groups managing director J.H. Taggart.

1936: Air links with Britain via Penang, Pan Am flies across the Pacific to Hong Kong. 1941: Japan's unexpectedly active participation in World War II brings the peaceful life in the colony to a sudden end. On December 8th Japanese troops crossed the border into the New Territories. By Christmas Day they had occupied the whole Colony. The Peninsula now becomes the Japanese headquarters and it was there that the commander of the British Forces, General C.M. Maltby and the Governor of Hong Kong, Sir Mark Young, formally surrender. 1942, April 23: the Japanese 'war-'management changed The Peninsula's name to "Toa (East Asia) Hotel". It opens for business on April 23rd. One of the resident guests is the Japanese Governor of Hong Kong, Lieut-General Rensuke Isogai. 1945: The war is over and in August Hong Kong returns to British rule. The hotel is requisitioned by the government to house refugees or those who lost their homes during bombings. 1946: The Peninsula is returned to her owners, The Hong Kong & Shanghai Hotels Ltd. 1948: Leo Gaddi is appointed as manager. Five Years later in December 1953, the finest restaurant at the hotel should be named after him. 1949: Hundreds of thousands of refugees arrive in Hong Kong to escape from the newly-formed "The Peoples Republic of China". 1952: The Korean war: once again The Peninsula was host to H.M. Forces. In this year the armed services agreed to move to their quarters across Hong Kong (to the Repulse Bay Hotel). 1953: Gaddi's opened. A milestone in gastronomic high class is set. "The best restaurant east of Suez" is created! 1954: The Grand Old Lady of the company, "The Hong Kong Hotel",closes. The Peninsula becomes the flagship of the Hong Kong & Shanghai Hotels Ltd. 1960s: The Peninsula undergoes a five year programme of renovations. Cost: HK$ 26 Million. 1966: Hong Kong has the third largest trading fleet in Asia (after Japan and India) 1966/67: The effects of the Cultural Revolution in China are felt in Hong Kong. Riots and other disturbances are caused by Chinese communists. 1970: A fleet of eight Brewster Green Rolls Royce Silver Shadow is acquired for The Peninsula. It was the largest single order Rolls Royce had ever received. 1970s: Hong Kong continues to develope to its role as the major trade and financial center of Asia. She also develops her industries in the New Territories. 1972: The enormous project of the street and underground tunnel between Hong Kong and Kowloon is completed. 1975: Hong Kong population 4.2 million 1994: Extensive renovation and the addition of the tower brings the number of rooms to 300 opulently decorated rooms or suites, which retained its nostalgic charm despite having the most advanced technological innovation. Extensive spa facilities now include a full harbor view Roman-style swimming pool, sun terrace, gymnasium, beauty and hair dressing salon. A fleet of Rolls-Royce limousines, as well as helicopter service are ultimate transfer options offered by the hotel. 1997: Hong is returned to China (in the "Treaty of Nanking" Hong Kong was declared a British Colony on 26th June 1843). 2002-2003: While the actual 75th anniversary falls on 11th December 2003, a year of celebrations is launched on 11th December 2002.

To name just some of the VIPs who have graced the hotel over the years:

How's this for a stocking filler? Rolls-Royce is celebrating its biggest ever-order for the Phantom after the Peninsula Hotel Hong Kong bought 14 bespoke examples of the long-wheelbase car in one fell swoop. The Peninsula Hotel has a history of huge Rolls-Royce orders stretching back to 1970, having bought 70 cars, and has specified a raft of changes for its latest fleet. A new design of screw was developed, for instance, to ensure there is no possibility that hotel guests' presumably very expensive luggage could be damaged in the boot. The boot is also 75 litres larger than the 460-litre norm to cope with the unusual amount of Louis Vuitton luggage that Peninsula guests no doubt travel with. There's also a cool box for the rear seats so guests can mop their brow with chilled towels as they watch DVDs on twin 12-inch screens. Air-conditioning controls have also moved to the armrest so passengers don't have to break a sweat when they adjust the temperature. Rolls Royce is unsure whether the Peninsula order is the biggest ever for the company. It suspects that a larger order may have been placed by the Co-op in the UK in the 1950s or 1960s. ------

Charles Chaplin arrived at The Peninsula with only his wife , very much to the surprise of Manager Felix Max Bieger, who expected a larger entourage. The reservation had been made for a 'two-bedroom suite'. When asked about this, the great comedian performed one of his famous pirouettes, stopped in front of Bieger and whispered: 'I snore and my wife hates it!' ------

One day Felix Bieger accompanied US movie star Danny Kaye in the lift to his floor. A lady looked at the actor very strangely: 'You look like Danny Kaye!' she remarked. 'Oh,' Kaye replied, 'many people tell me that!' ---- The Peninsula, Hong Kong, around 1970: It was already after midnight when a pair of regular customers entered Gaddi's, 'The Pen's' finest restaurant (with a stiff dress code) for a night-cap. Headwaiter Chan Pak spotted them and, to his dismay, had to inform them that they were inappropriately dressed since neither of them was wearing a jacket. "Sorry, gentlemen," he said, "but you cannot enter this restaurant with just a shirt and tie." He had hardly finished speaking when the two men immediately took off their ties and shirts and stood half naked, whilst being applauded by the entire restaurant. Then they got dressed and beat a hasty retreat. --------

The 26th-floor suite at the Hong Kong Peninsula was built with spooks in mind. Since many of the visitors to the suite are diplomats and heads of state, both the CIA and MI5 were consulted on the design to ensure maximum security. While we can't confirm whether or not the room is bugged, the room has direct access to the hotel's helipad for quick getaways, and there is also a security guard's room down the hallway. (The hotel can't reveal what else the CIA and M15 suggested, due to security reasons.) The Peninsula Suite starts at $5,000 per night Guests of the suite also have access to a 24-hour butler and a Rolls-Royce on standby. The suite has one master bedroom but can be converted to a seven-bedroom spread with adjoining rooms. The rooms are sleek and modern, with double-height ceilings and liberal use of pale, natural materials such as marble and limestone. The windows in the sitting area are floor-to-ceiling and offer views of the city, and the suite also has a fitness room, private study, dining room and kitchen as well as a terrace.

Eat the best food in town. Take in the breathtaking vistas of Hong Kong's legendary harbour from the hotel's new tower.

The hotel has a roman-style swimming pool and spa with a wide range of exercise facilities. 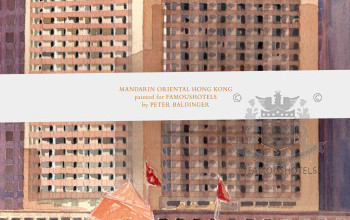 The Mandarin is the Hong Kong father of the Mandarin Oriental Group. In Bangkok this "father" merged with "mother" The... 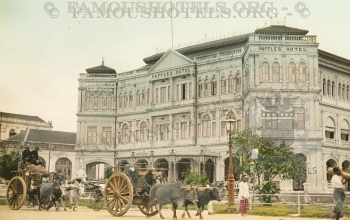 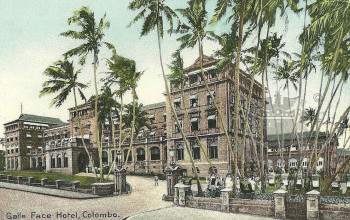 The Galle Face Hotel was established in 1864, five years before the Suez Canal came into operation. A journey...

First of all, obtain your very own and personal copy of Marcel Proust’s A La Recherche du Temps Perdu.... 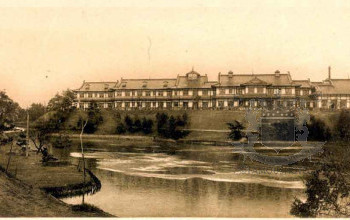 Opened on 17 October 1909, it is one of the most historic hotels in Japan. It is partially owned by the West... 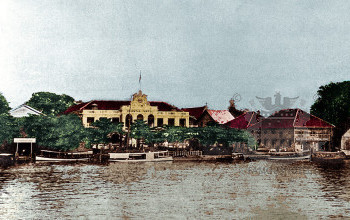