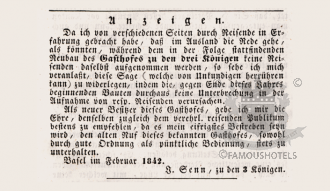 Announcemnt in 1842, explaining that the inn undergoes a renovation.

Whlle accepting the official date of birth of this legendary Swiss hotel with its first mentioning in official records, we still treasure the saga that there was an inn of sorts in the medival times of the year 1026, and that within its walls in that year Emperor Conrad II, his son Henry III, and Rodolphe, the last King of Burgundy, held a conference there. So that place subsequently became known as the location where Three Kings had met.

Officially – and as a grand hotel – Les Trois Rois opened on 16 February 1844. (read more under HISTORY >>> to the right). Amadeus Merian was the architect, over 160 years later Christian Lang was in charge of the 2006 renovations.

Over the decades the hotel found its place among other continental grand hotels. It witnessed historic moments more than once. In 1797 General Napoleon Bonaparte lodged at the Three Kings. In 1901, the father of modern Israel, Viennese journalist Theodore Herzl (left, on the hotel's balcony), stayed here during a Zionist Congress. Was this the foundation stone of the love of orthodoxe Jews for Switzerland? Today they are flocking to the Swiss mountains and lakes every summer.

The city's society holds it family events at the hotel and the most important state receptions are also held there. We love its location directly at the river Rhine, and that it is today such a splendid up-to-date hotel, a true gem in the crown of famous Swiss hotels.

A little story appeared recently: The distinguished composer and conductor Pierre Boulez was awakened by police at six in the morning in his room at the Hotel Les Trois Rois late in 2001; the officers confiscated his passport and disappeared.
It turned out that, 'some' years earlier, in 1967, Boulez had given an interview to German magazine Der Spiegel in which he stated his opinion about the architecture of the Basel Opera House, saying that "the opera houses should be blown up".
The observation had resurfaced in the media during the 1990s, and the law enforcement officials had apparently picked up on it during a routine check 34 years later of hotel guest registrations (that much about Swiss efficiency).
On this occasion, however, they decided not to pursue that matter and the passport was returned after a few days.

1026 Emperor Conrad II, his son Henry III, and Rodolphe, the last King of Burgundy, held a conference at at the River Rhine, where, later in time, an inn became known as the Three Kings.

1681 First officially documented record of an inn called Three Kings or “At the Three Kings” at Blumenrain 8 in Basel. The hostelry was always located close to the main trade and travel routes by water and over land directly at the so-called Schifflände (boat quay).

1754 Innkeeper Johann Christoph Im Hof has three figures carved out of wood to represent the three kings and mounts them on the façade of the building.

1797 General Napoleon Bonaparte lodges at the Three Kings while travelling. He is honoured with a glittering state reception.

1798 During French rule, kings are out of favour and the hotel is temporarily known as “Hotel aux trois magots” “At the three bundles”.

1842 Senn has the buildings torn down and commissions Basel Architect Amadeus Merian to build the new hotel.

1897 The Austrian journalist Theodor Herzl stays at the hotel from 26 to 29 August. During the 1st Zionist congress in Basel, he lays the foundations for the creation of the state of Israel.

1915 The southern section of the hotel (Blumenrain 2) is sold to the Kantonalbank and renovated accordingly.

1938 The Kantonalbank moves out and the tourist office takes over the main building at Schifflände.

1841/42-1972 Director Alfred Kienberger has a significant impact on the Drei Könige am Rhein/Hôtel des Trois Rois and rebuilds its reputation at an international level after the war.

2004 Entrepreneur Dr. h.c. Thomas Straumann acquires the Three Kings and the former southern section at Blumenrain 2. He spares no expense is restoring the buildings according to national heritage criteria with sections reconstructed according to the original plans. At Blumenrain 2, the addition of a number of rooms leads to the creation of a large ballroom, banqueting and conference rooms.

We are told that the hotel stood here as early as the year 1026, and that within its walls in that year the Emperor Conrad II, his son Henry III, and Rodolphe, the last King of Burgundy, held a conference. Six years later Conrad won a battle over the Bergundians and annexed Western Switzerland to Germany. It was this historic meeting of three monarchs in the old inn that caused it to be named the Three Kings. This incident is so very remote that it is largely traditional, but in more recent times the hotel has entertained Kings, Grand Dukes and Princes, as well as Queens and Princesses and Grand Duchesses. Among the royal names on the register are those of King William of Wurttemberg; King Oscar of Norway and Sweden; King Christian IX, of Denmark; Carol, King of Rumania; King Peter I of Serbia; King Leopold, of Belgium; King Albert, of Belgium, and the Khedive Ishmei, of Egypt, to mention only a few.

We are updating our database

In Europe as a rule, well dressed and behaved travellers will always be received with greatest respect. It shows style to behave well, and that includes proper dress at the right occasion. If in doubt, ask the concierge.