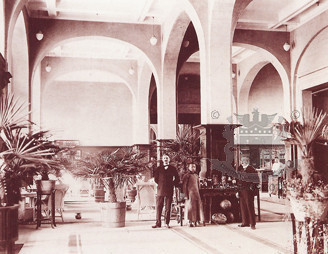 Since its opening in 1900, the hotel is one of the finest addresses of the Orient.

The Grand Hotel Beijing has a splendid history, indeed. It was built at times when Beijing was Peking (or Pékin), and an imperial city, ruled - with interruptions - by the Emperor of China for more or less 900 years. The city was ‘a city of gardens, with few crowded neighbourhoods visible, the characteristic features of the scene were upturned roofs of temples, palaces and mansions, gay with blue green and yellow glazed tiles, glittering among the groves of trees with which the city abounds.’ (Encyclopedia Britannica, 1890).

The Grand Hôtel de Pékin in 1920, after it had been rebuilt in 1917. It is nice to compare the two pictures of then and now (sorry for that rather sad image of the new hotel. Once we get them to switch on all the lights in the rooms we will publish a better one). You find all details under History>>.

The 20th century held other important events in store for China than preserving traditional hotels. They either fell in despair, became government hotels or made place for new buildings of a totally different function.

But this Grand Hotel (read its story of the various blocks and buildings under 'History') was always considered one of the finest hotels in the Orient. The French-funded Grand Hôtel de Pékin had 200 rooms with bath and a tea hall “with dancing every night.” The hotel had “its own orchestra, which rendered a program of classical music during dinner.”

A brochure from the 30s also tells of its “spacious roof garden commanding lovely views of the Forbidden City, the Legation quarter and 50 miles surrounding.” The hotel was well known for its excellent “French cooking” and “wines of the best known districts of France.” The offices of Thomas Cook were located in the lobby. It was located opposite the Italian Legation and three minutes from the train station. “Autobus and porters in uniforms meet all trains.” Needless to say it was a favourite of travelling Westerners.

1917: new building replaces first hotel. The French-funded Grand Hôtel de Pékin had 200 rooms with bath and a tea hall “with dancing every night.” The hotel had “its own orchestra, which renders a program of classical music during dinner.” A brochure from the 30s also tells of its “spacious roof garden commanding lovely views of the Forbidden City, the Legation quarter and 50 miles surrounding.” The hotel was well known for its excellent “French cooking” and “wines of the best known districts of France.” The offices of Thomas Cook were located in the lobby. The same brochure describes it as located opposite the Italian Legation and three minutes from the train station. “Autobus and porters in uniforms meet all trains.”

2006: the hotel reopens after a phase of renovation as Raffles Beijing Hotel.

Established in 1900s, the Beijing Hotel witnessed many of the city’s significant social and political events, its commanding French-infused colonnade façade has long stood as an icon of Beijing’s historical heritage, its fortunes closely intertwined with the city’s history. Yet its origins are humble and the evolution from small hostel to legendary hotel happened gradually, in the early years of the 20th century.

1900
It was the twilight years of the Qing Dynasty and the Boxer Rebellion, when two enterprising Frenchmen opened a small restaurant with rooms in the Legation Quarter.

1901: the hotel was relocated to larger premises, named the “Peking Hotel”.

1903
The Peking Hotel was sold to Mr. Rosso, an entrepreneurial Italian. The transaction involved a Chinese courtyard residence of 20 guestrooms as well as a dining room, parlour and wine cellar. Business was brisk and flourishing. Mr. Rosso soon purchased a prime piece of land at the southern end of Wangfujing Street, just outside the legation quarter and next to the Forbidden City and relocated the hotel. There he began grand expansion plans but was unable to complete them.

1907
Mr. Rosso sold the hotel to Sino-France Industrial Bank. The new owners restructured the hotel as a limited company and continued with the expansion plans. When completed, the hotel was advertised as the “Grand Hotel de Peking”. This building survived until the early 1970s when it was demolished to make way for a 20-storey tower block adjacent to Raffles Beijing Hotel.

1915
The growing popularity of luxurious cruise ships and ocean liners boosted global travel in general and facilitated the growth of tourism in China. The first wing of the Grand Hôtel de Pékin, a five-story red brick structure, was completed in 1915.
A 1915 advertisement recorded the completion of the renovations, proudly announcing steam heating, private baths and flush toilets throughout.

1917
A second wing, today known as Block B, was completed, making the hotel one of the oldest in Beijing.
The opening of this new Beaux Arts style seven-storey steel and concrete fireproof building brought the number of rooms to 200, each with private bath and city telephones. Two Otis elevators took guests to the bar and open-air terrace for dancing on the seventh floor. Over 800 distinguished guests packed the lobby and dining halls during the opening event. The greatly expanded facilities defined a new style of luxury and ensured the hotel’s place as the city’s premier address.

1920s
The Grand Hotel de Peking luggage label was increasingly found on the trunks and suitcases of seasoned travellers and was patronized by all communities.  It served as a major venue of social contact for Chinese and foreign dignitaries and was the preferred address for gourmet parties, concerts and dances. The hotel unbashfully advertised as “the only hotel de luxe in the Far East” and became the hotel of choice for Chinese and visiting luminaries.  It was also known for its cuisine - “Unexcelled cuisine, with French chef. Banquets a specialty, Wines of the best districts of France”, read one advertisement.  Social dancing was at its pinnacle, which saw to the installation of a special French-style dance floor, now faithfully restored.  Among the popular traditions were the daily High Tea in the lobby and summer dining and dancing on the roof terrace that overlooked the Forbidden City. Two private limousines met guests at the railway station. The hotel housed the headquarters of Thomas Cook Travel Agency and several shops selling antiques, carpets, embroidery, jewelry and books.

1930s
Against a backdrop of increasing social and political unrest the hotel continued to function and rooms remained in demand. When the rooms were all occupied, guests rented beds in the corridor.  The bar was especially popular with diplomats and journalists. As the security situation worsened, the French sold the hotel’s shares, mainly to the Japanese who eventually became the majority shareholders.

In 1937 the Japanese occupy Beijing and took over the management of the hotel. Many of the guests were Japanese and some guest rooms were redecorated in Japanese style.

Early 1940s
During World War Two the global tourism industry comes to a complete standstill. The hotel is the venue of political functions and is popular with Japanese military and administrative personnel.

Late 1940s
After the Japanese’ surrender, the Kuomintang Army took over the hotel and used it as a hostel for American troops.  Its management was later passed to the Beijing Municipal Government and a committee was established to manage the business.

1949
On 31 January the People’s Liberation Army marched into Beijing and on 1 October Mao Zedong proclaimed the establishment of the People’s Republic of China.  PLA commanders occupied the hotel, now known internationally as the Beijing Hotel. To celebrate the inauguration of the new republic, a celebration banquet was held in the hotel.  Among those in attendance were Mao Zedong, Liu Shaoqi, Zhou Enlai, Zhu De, Dong Biwu and other leaders.  Normal business was restored after a few months.

1950s
The hotel continued to play an important role in Beijing’s social scene and, until the opening of the Great Hall of the People in 1958, was the venue for all major functions.  To cope with the increased demands, a new wing was commissioned adjacent to the original 1917 block.  Completed in 1954, it provided an addition of 200 guest rooms and a grand banquet hall.
The new wing is today known as Block C.

1970s
Further expansion continued. The pre-1910 portion of the hotel was during the years 1972 to 1973 with a 20-storey block, the only authorized tall building in central Beijing overlooking the Forbidden City. In 1978, Deng Xiaoping launched economic reforms and proclaims the “Four Modernizations,” in industry, agriculture, science and defense. The original red brick 1915 wing was demolished for the construction of Block D, on the east, in 1974. The towering Block D is today the only remaining wing to use the name (Raffles) Beijing Hotel.

1980s
As China opened up to the world, the Beijing Hotel served as interim offices and residences for major corporations, international diplomats and investors.

1990s
Beijing Hotel returned to its normal function as a hotel for travellers and a social venue for Beijing society.  Renovation works were undertaken to modernize hotel facilities and increase the room inventory. These included the construction of an additional block (Block E) directly behind the 1917 building (now known as Block B).  The two blocks are connected by a spacious atrium.

2001:
At 89 meters, the tower was the tallest building in Beijing at the time. Finally, Block E was built directly behind the 1917 wing.

2005
A new phase in the history began in September when Raffles Hotel & Resorts was appointed to restore and manage Blocks B and E.
The hotel complex today operates under three separate names.
In April 2005, Raffles Hotels and Resorts Limited signed an agreement with the Beijing Tourism Group (BTG), to re-brand and manage the historic 1917 Block B in the middle and the modern Block E behind it under the Raffles brand. After carrying out renovations and refurbishment, that portion of the complex was re-launched as Raffles Beijing Hotel (S: ???????, T: ???????, P: B?ij?ng Fàndiàn Láifóshì) in 2006.

2006
The hotel re-debuted as Raffles Beijing Hotel on 27 June.

Many foreign journalists were based in the hotel during the spring of 1989. This was the site where Associated Press photographer Jeff Widener took the famous "Unknown Rebel" picture during the Tiananmen Square protests.

During the 2008 Summer Olympic Games, the hotel served as the headquarters of the International Olympic Committee.

After the hotel had opened (1900) the Boxer Rebellion broke out. The new hotel, so it was feared, symbolized the intrusion of the West in China and could become a target for the rebels. Therefore the Swiss manager, Mr Chamot, asked his guests to vacate the hotel and offered to lodge them in a pavilion belonging to the British legion. Until the arrival of the international expeditionary force, Chamot did everything he could to make them comfortable. As food provisions were difficult, his chef, showing great imagination, served them pony and horse meat under many guises.

Many foreign journalists were based in the hotel during the spring of 1989. This was the site where Associated Press photographer Jeff Widener took the famous "Unknown Rebel" picture during the Tiananmen Square protests. According to journalist Zhang Boli, the last meetings between the students and government took place at the hotel on May 30, 1989, where no agreement was reached.