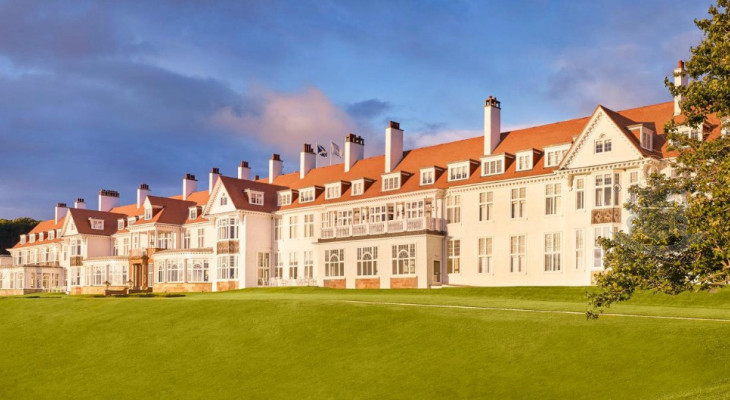 What looks like a row house complex is in fact the former stationhotel and today's famous Sottish golf resort Turnberry.

In summer 2009 the Turnberry reopened after extensive renovations. In 1901 this was the private estate of the Marquess of Ailsa with a private course. In 1906 it became the Turnberry hotel and railway station, creating the first golfing resort of it's kind.

1901: The Marquess of Ailsa builds a small private course on his estate 1903: Turnberry is taken over by the Glasgow and South Western Railway

1906: Turnberry hotel and railway station is opened, creating the first golfing resort of it's kind. 1909: Turnberry offers two 18 hole golf courses, the No. 1 and No. 2, designed by Willie Fernie 1912: Ladies British Open Championship held for the first time During WWI: Turnberry was requisitioned as a training station for pilots of the Royal Flying Corps (The war memorial on the hill above the 12th green was erected in memory of those who lost their lives) After the land was relinquished by the War Office a new number two course was built and became so popular that it ousted the principal course as favourite for visitors and championships 1921: Formidable Charlotte Cecilla Pitcairn Leitch wins the Ladies Open by inflicting on legendary Joyce Wethered her only defeat in the final of a national championship.

1926: London Midland and Scottish Hotels assumed control of Turnberry The No. 1 course is named the Ailsa and No. 2 the Arran Arthur Tawle commissions Major Cecil Hutchinson to redesign the Ailsa and is completed in 1938. Again Turnberry was taken over during the WWII. Runways and hangars were built on the golf courses while the hotel was used as a military hospital. After WWII, it required a stubborn campaign by the aptly named Frank Hole, managing director of British Transport Hotels to restore Turnberry to its former glories. 1949: Mackenzie Ross was handed the enormous task of re-designing the golf courses, which were left completely desolate, and composed of acres of tarmacadam, concrete and aircraft hangars 1951: the Ailsa is reopened to a justifiable fanfare of trumpets 1954: the Arran is reopened 1963: Turnberry hosted its first major event - The Walker Cup. America beats Great Britain 12-6. 1977: Turnberry's first Open Championship: which saw Jack Nicklaus and Tom Watson go head to head to produce one of the greatest final days in Open history 1979: At 21 Sandy Lyle, later to become the Britain's first Open winner in 16 years, wins the European Open. 1986: Greg Norman takes the Open, his first major championship, and his second round 63 is rated among the greatest of all time. 1994: Nick Price wins his first Open. December 1997: Westin purchases Turnberry January 2000: Starwood's $21million investment programme commences July 2000: Opening of the Colin Montgomerie Links Golf Academy the World's premier teaching and practice facility for Links golf. June 2001: The opening of the new Championship Kintyre golf course which was designed by Donald Steel and builds on the challenges laid down by the old Arran course. August 2001: The opening of The Outdoor Activity Centre.

2009: Turnberry reopened after extensive renovations in time for the 138th Open Championship in July 2009. Interior designer Mary Fox Linton had lead the renovation. The property became a member of Starwood's The Luxury Collection portfolio.

2014, The Trump Organization purchased the hotel. A ballroom was added to the resort.