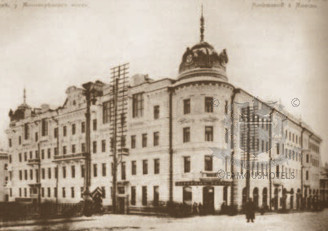 The original house of Mr. Osipov was the forerunner of todays palatial building.

On the site of the former Hotel Bucharest, the Hotel Baltschug Kempinski Moscow has been writing its own history for over a decade. The exterior walls, dating back to 1898 and the reign of Tsar Nicholas II, are the only remnants of the original building. The hotel first made headlines when its new building was erected in 1898 by the well-known Moscow architect Alexander Ivanov.

Featuring a stunning façade embellished with decorative figures overlooking the river and a more modest front for the Balchug Street side, the new building displayed architectural elements from the era of neoclassicism. This early hotel offered a diverse selection of goods and services for guests: a restaurant with a three-furnace beer brewery as well as a barber, baker and loan agency were located alongside shops selling metal goods, window shades, cheese and bread.

Following the October Revolution, the building again changed hands. From 1928 to 1932, as the Hotel Novomoskovskaya, it became a massive seven-story stone structure. In 1933, ownership transferred to Intourist, the official state tourist agency, which used the building as a dormitory before it became the Hotel Bucharest in 1957.

Since 1992 it is called Baltschugg, an the management company Kempinski assures us of high quality service. Spectacular views of the Kremlin, Red Square and St. Basil's Cathedral makes it the perfect vantage point overlooking Moscow's historic centre. Moscow's main attractions are just minutes away, and some even within easy walking distance, the hotel's location in the relatively quiet Zamoskvorechye Moscow district provides an opportunity to escape the hustle and bustle of the city center to a luxurious haven of peace and comfort.

1898 its new building was erected by the well-known Moscow architect Alexander Ivanov. Featuring a stunning façade embellished with decorative figures overlooking the river and a more modest front for the Balchug Street side, the new building displayed architectural elements from the era of neoclassicism. This early hotel offered a diverse selection of goods and services for guests: a restaurant with a three-furnace beer brewery as well as a barber, baker and loan agency were located alongside shops selling metal goods, window shades, cheese and bread. 1928 to 1932, as the Hotel Novomoskovskaya 1933, ownership transferred to Intourist 1939 the hotel was converted into a residential hostel for the Department of Foreign Policy, but sixteen years later it was once again reincarnated as 1957 Hotel Bucharest 1992 after reconstruction Baltschug Kempinski After the fire of 1812, in which the traditional wooden structures of the district were destroyed, a small two-story hostelry was built on the site now occupied by the Hotel Baltschug Kempinski Moscow. This popular boarding house was expanded throughout the 19th century, but demand for its services and superb location eventually outstripped its size. A. Osipov, the owner of a two storey stone house situated at the corner of Baltschug Street and the embankment (now Raushskaya Embankment), rented out apartments to visiting merchants, or to those trading in the Baltschug district, were always in demand. Osipov was so successful that his grandsons were able to embark on a much more grandiose project. In 1897 they gave their commission to a very fashionable city architect of the time, A.I. Ivanov. In less than a year, the old low-level buildings gave way to a tall imposing building, with angular towers, crowned by spires. On the ground floor there was a restaurant, but the upper levels were not designed as apartments for living, but as studios for artists. The roll call of artists who worked here is impressive, including A. Kuindzhi, I. Kramskoi, A. Vasnetsov. The view from their studios encompassed the Moscow River Bridge, the Kremlin and St Basil's Cathedral, and it accordingly became one of the most well known picturesque views of the capital. The archive records show that the last owner of the building before the 1917 Revolution was the Chancellor to His Majesty's Court, Bereznikov (although, in accordance with a tradition of that time, the building was actually in the name of his wife). Thanks to detailed records we also know much about the people who lived here. They comprised high ranking civil servants, representatives of well-known commercial establishments, and doctors with ‘apartment hospitals’. There were also artists here, including the Academician V.K. Byalynitskiy Birulya, whose pictures can be found in the Tretyakov Gallery. It was a very multinational building, with German, Austrian, Swiss, Swedish, and British citizens living here. The offices of famous foreign companies were also located here, including the Brothers Nobel and Stanley Smith. After the revolution of 1917 and the movement of the capital from Petrograd back to Moscow, the 'Osipov Building' was packed to the seams with state officials and offices. However, before long, the building reverted back to its former 'specialization'. In 1928 on the map of Moscow a 'new' hotel appeared, called the Novo Moskovskaya. It was increased in height, the last time in 1932; the then seven-storied hotel passed into the hands of the state tourist agency, Intourist. Together with the Metropol, the Savoy and the National, these hotels were used to accommodate, and impress, foreigners visiting the Soviet Union, studying that ‘spectacular’ new system of Communism.
In 1939 the hotel was converted into a residential hostel for the Department of Foreign Policy, but sixteen years later it was once again reincarnated, this time as the Hotel Bucharest. Over the years the building began to show its age, and in the 1980s the question of refurbishment came up; this, it was recognized, would require significant investment. The issue was solved in 1989 when a joint Russian Austrian Swiss enterprise was formed, 'Baltschug', which placed an order for the construction work with an Austrian company.
The Austroy Baugesellschaft transported building materials from Austria by truck in over 600 trips.
1992: 1 October saw the re-opening of a hotel unsurpassed in beauty and well worth the reconstruction costs of approximately USD 85 million. Since then the Hotel Baltschug Kempinski Moscow has served as a preferred venue for many important events, bringing people together to help make the Moscow miracle happen.
Managed by: Kempinski
230 Rooms