It has taken us almost 20 years to research the history of The Strand, the incredible and legendary most famous hotel of Yangon.

The Strand is the only hotel in Yangon left from colonial days. Built and run by the Sarkies, the famous Armenian hotel family, it was part of a hospitality empire, which ranged from Singapore’s Raffles Hotel to Penang’s Eastern and Oriental and to the ambitious plans to build the Majestic Hotel in Calcutta.

The Strand’s story takes us back to the days of the Bibby and Henderson Lines, which plied their services between Europe and Rangoon. From there, we take you aboard the first Imperial Airways aircrafts, back in the times when the London to Rangoon trip took a mere nine days.

Meet the old colonialists at their clubs and at the Strand‘s Bar. Visit old Rangoon when a tram route used to pass by the Strand Hotel on its way from the harbour to the heart of the city. Join Rudyard Kipling in his memoirs and read Somerset Maugham’s notes. Meet the Prince of Wales on his visit to Burma and enjoy the tales and memories of so many old friends of The Strand. They‘re all gathered here in one book to celebrate their Strand, which has a great past, and an equally promising future. 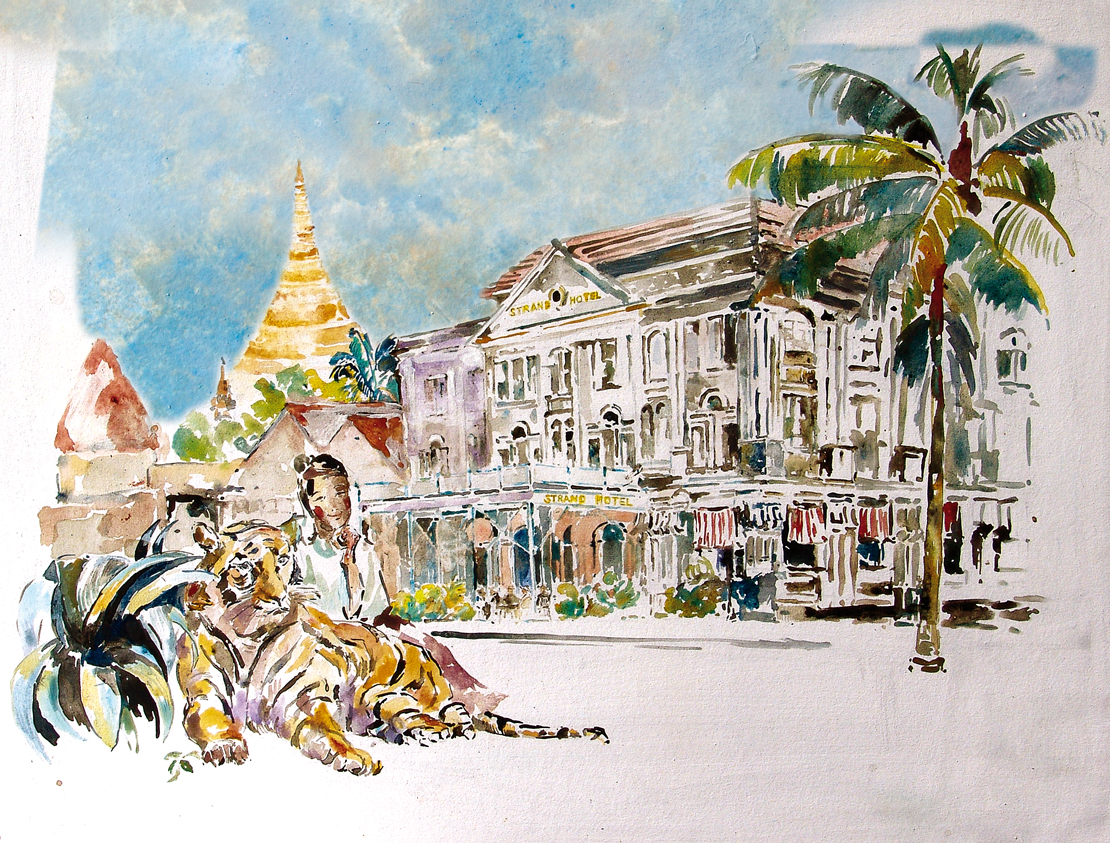 The fight arrives from Bangkok and lands at Yangon, the former capital of the Union of Myanmar, after less than an hour. A representative of The Strand is waiting to help with the necessary immigration formalities. He takes care of the luggage and from that moment on I am under the wings of my temporary new home.
The hotel’s limousine glides along the winding road from the airport into the city of Yangon. Saffron-robed boys with shaved heads walk with their alms bowls towards town, going through their shin-pyu, the Buddhist tradition of ‘becoming a human’. Passengers hang from buses like clusters of ripe grapes from a vine. Imported limousines gently overtake local bullock carts.

The driver pulls up at the front entrance of The Strand, the little grand hotel of Yangon. The head butler, says ‘Mingalarbar’. He arranges for the luggage to be brought upstairs. We are ‘stranded’ along the Irrawaddy River.
Again, like in Singapore, we are confronted with the irony that this is considered to be another of the ‘most British’ and ‘colonial’ hotels of Southeast Asia. In fact is was conceived, built and run by an Armenian family rm. Never ever was it British. The Strand has never changed its name, while the capital Yangon was long called Rangoon. Yangon has the blissful meaning ‘end of strive’. Rangoon was merely the name of the city. No meaning.
The gold and gems market is close by, so are the alleys where talented artists are presented in stall-like galleries. Paintings, jade, pearls, stones, stunning handicrafts. In the streets everybody looks at you. Not away from you. Western citizens are perplexed.
The afternoon is spent in a time-warp commonly known as Shwe Dagon Pagoda. We return to The Strand’s lobby, a haven of cool air. We sit down to sip Myanmar high tea to the soothing sounds of a harp and a xylophone. The Strand bakery sends a basket
with pastries, accompanied by gooseberry jam, banana muffins, jam tarts and honeycomb ice-cream for the kids. We dine at The Strand. Later the bar beckons and we indulge in one of its concoctions. More and more people gather around the bar. It is Friday night, after all, the Strand night out in town. I think of all the artists who found inspiration here. Who knows? Perhaps Orwell or Coward were once sitting right here. Maybe it was here that Maugham wrote: ‘. . . if I could plunge into that enigmatic life and lose myself in it as a cup of water thrown overboard is lost in the Irrawaddy . . . ’

Very special thanks go to Sally Baughen, who had the idea for this book in the first place, and Sukhdeep Singh, Managing Director of Myanmar Hotels International, who helped to get this project rolling. We do thank Didier Belmonte for his continued support to publish this second edition of this book. In this respect we enjoyed the cooperation on the third edition with Olivier Trinquand.

We are grateful for so many personal stories and memories and wish to thank Monica Mia Maung, David Wordsworth, Kenneth Gaw, U Win Maung, Kyaw Soe Moe, Jordan Theodoros Baseah Petros Martyrosian (Basil P Martin) Apollo Jolly, U Kyaw Shein, U Myat Tha, U Than Lwin (Robin), Bernard Pe-Win, Drs Frans H P M Jansen, John Reed, Tony Wheeler, Hubert Schwetz and Ilsa Sharp.
Thanks to Hugo Quantinet for the updated material and information. Special thanks for his personal memories and engagement in the preservation of The Strand to Adrian Zecha.

All rights in this publication are reserved. No part of this book may be reproduced, stored in a retrieval system or transmitted in any form or by any means, electronically, mechanical, photocopying, recording, or otherwise without the prior permission in writing of the copyright owner (except for book reviews for inclusion in magazines, newspapers, radio or TV broadcast).
The right of Andreas Augustin to be identified as the author of this work has been asserted by him in accordance with the Copyright, Designs and Patent Act 1988.
Photographs:
Archives: Imperial War Museum, National Library, both London; Library of Congress Washington; The Austrian National Library Map Collection; The Imperial Hotel Art Collection, New Delhi; Archives of Famous hotels
Contemporary: Joplin Sinclair, Tim Hall, Pierre Poretti Labels and related research: Joao Mimoso
Cover illustration: Manfred Markowski
Edited by Carola Augustin The incredible tale of the legendary Strand Hotel, The most famous hotel of Yangon: New edition 2017 including 20 pages, the new Stran... 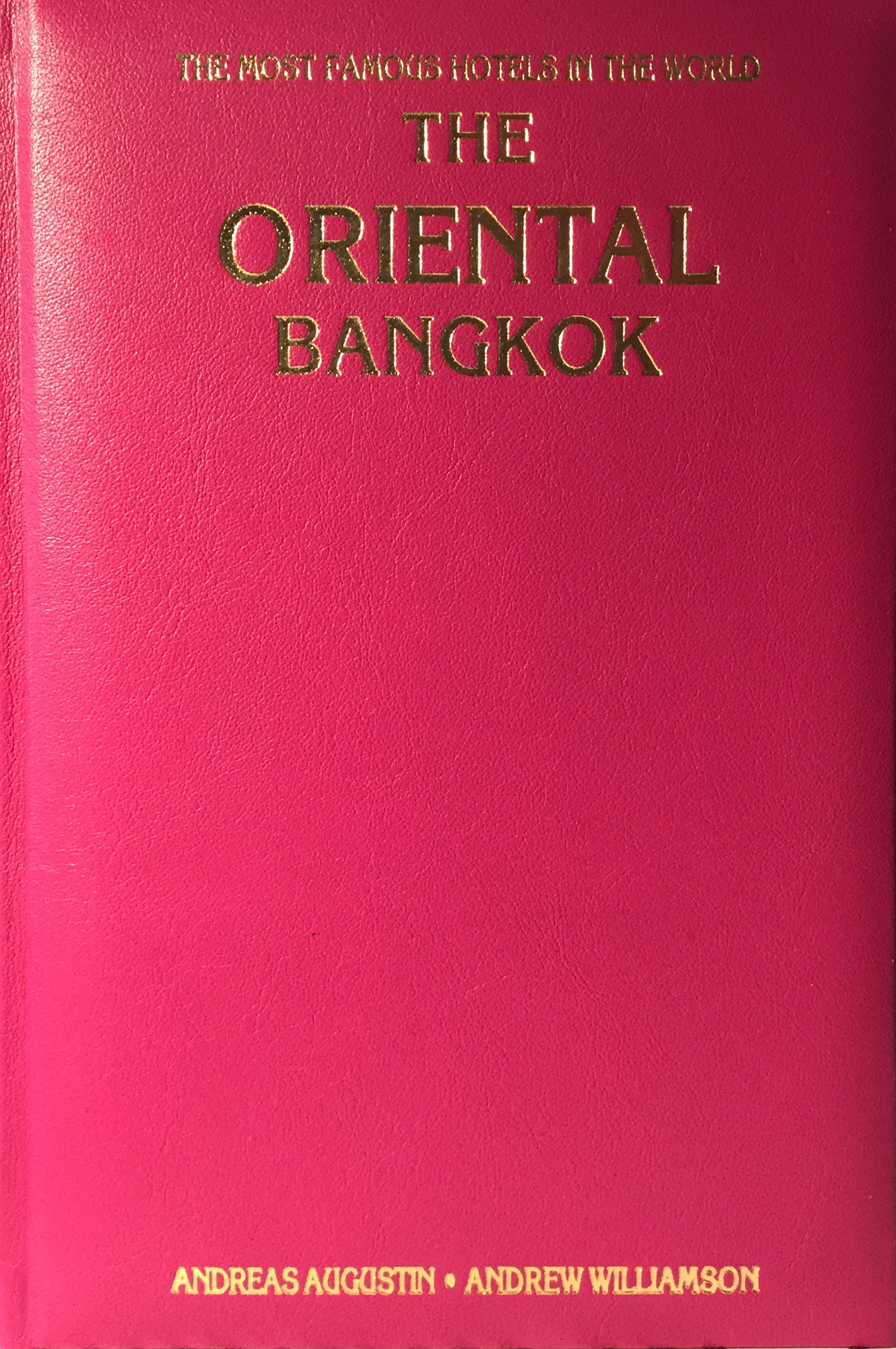 The leather bound books form a limited edition of famoushotels books. They are hand bound and – upon request – autographed ... 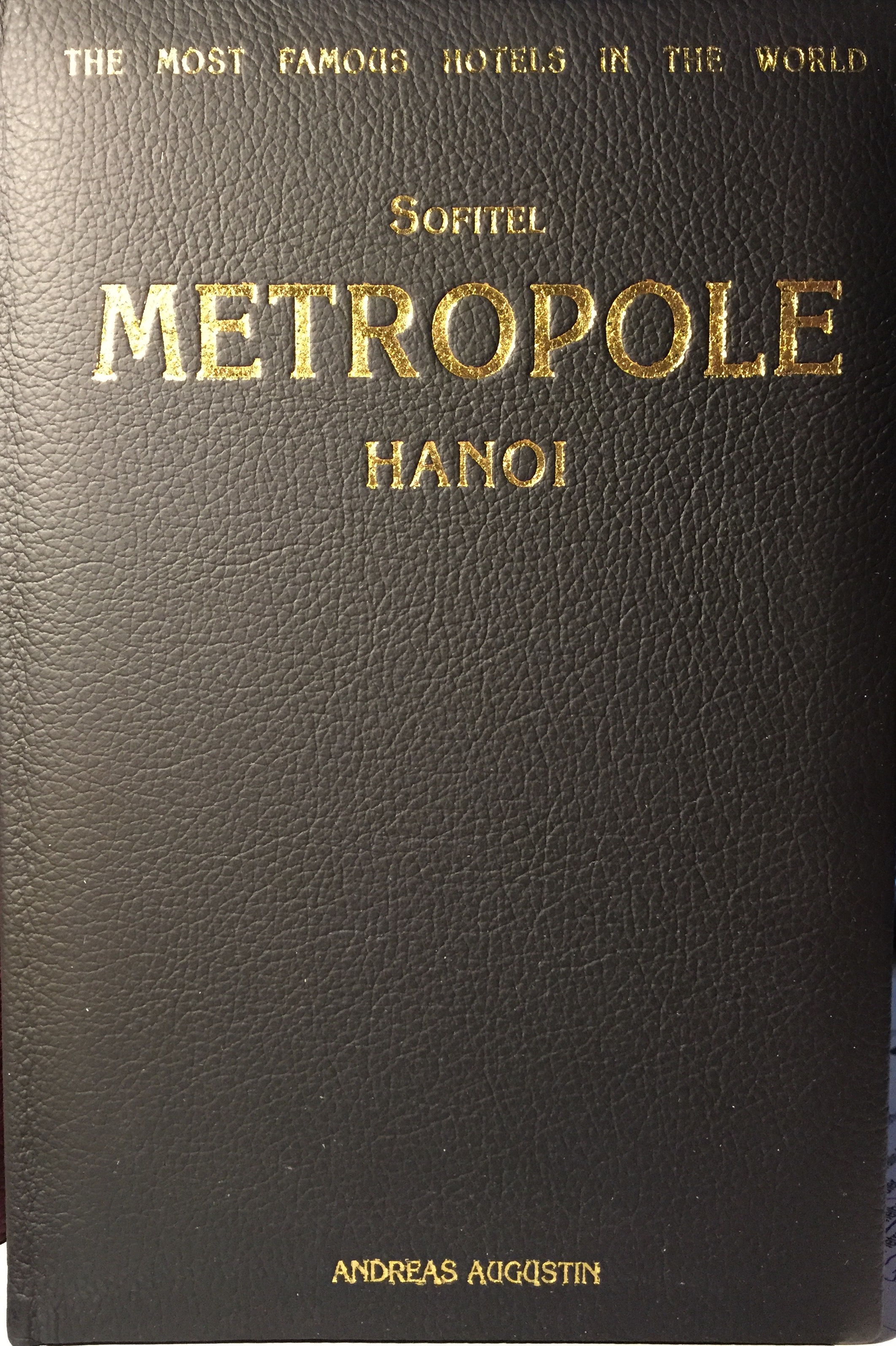 The hand bound leather cover makes this a very special vintage collectors edition. Only 20 pieces of the 2007 edition were produced. Th... 'In the evenings gentlemen were always dressed in elegant white tropical suites, wearing a topee or a Panama hat. During th... 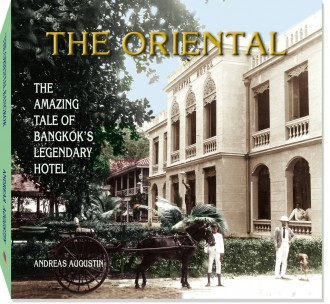 The Amazing Tale of Bangkok's Legendary Hotel The 2021 edition is in preparation — all orders placed now will receive&nbs...